Stroke, also known as “wind stroke” in Chinese Medicine, is a cardiovascular condition that occurs when blood flow to certain areas of the brain is cut off, causing brain cell damage due to the deprivation of oxygen. The symptoms that follow as a result of the damage are collectively called a stroke. These symptoms are wide-ranging and are directly related to the severity and location of the damage in the brain and how quickly blood supply returns to the affected cells.

How do we treat stroke at Complete Balance?

During the onset of stroke, our goal would be to reduce swelling in the brain to reduce the severity of the damage. This is why the earlier the intervention, the better the prognosis. In addition, acupuncture can serve to restore blood and oxygen flow back into the brain to prevent further cell death. Lastly, acupuncture treatments can break down the clots without any side effects.

At Complete Balance, we use a combination of Tung acupuncture along with Zhu’s scalp acupuncture. This particular style of acupuncture has been practiced since the 70’s and is recognized worldwide for its effectiveness in treatment of neurological conditions, particularly stroke.

Although the results are most remarkable in the acute stage as earlier intervention reduces the number of deficits, Zhu’s scalp acupuncture in combination with Daoyin can speed up the recovery process and help regain lost functions, which perhaps may not return on its own. For lost motor or sensory function, treatments have to be repeated frequently to reinforce the neurological pathway. The treatment of stroke is a specialized technique that require specific skills and training. 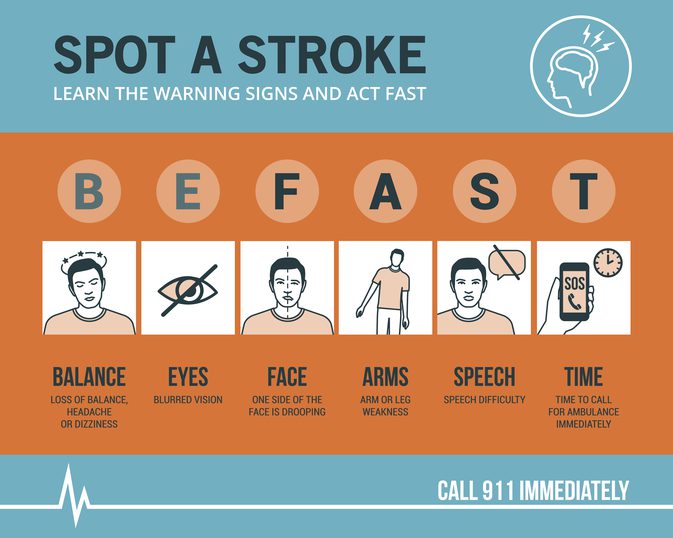 Causes of a stroke
There are two major types of stroke: ischemic stroke resulting from a clot blocking a blood vessel, and a rupture in the blood vessel which is known as hemorrhagic stroke.

Years of poor dietary and lifestyle habits create plaque buildup in the inner lining of the blood vessels, making the vessels harder and more narrow. Therefore, a person with high levels of cholesterol, triglycerides or thick blood have increased risk of ischemic stroke.  A clot from the heart could also travel to the brain and this is often seen in individuals with atrial fibrillation or heart valve problems. It takes years for this build up to occur so ischemic stroke is most commonly seen in the older population.

One of the leading causes of hemorrhagic stroke is the weakening of arteries over time due to high blood pressure. Other factors such as traumatic injury to the brain, a tumour, an infection, complications from drugs or birth defects that result in abnormalities in the vessels leading to aneurysms or arterio-venous malformation can also rupture the blood vessel in the brain. This is why hemorrhagic stroke can happen at any age.

An experienced doctor can differentiate the types of stroke based on the patient’s symptoms but diagnosis is best confirmed through CT scan or MRI. CT scans are unable to detect new clots in the first 48 hours of the stroke so MRI would provide a more accurate view.

Western Treatments for Stroke
Stroke is an emergency condition where every second counts. Stroke patients are often admitted into the hospital to receive a range of tests to determine the type of stroke, area of the damage in the brain and the severity of the damage.

Ischemic stroke patients are often given Warfarin, a blood thinner  to prevent the formation of new clots. However, this drug does not dissolve clots that have already formed so the functions that have been lost as a result of the clot cannot be regained with the use of this medication. Overdose of Warfarin can also lead to internal bleeding.

Tissue plasminogen activator (tPA) is another FDA approved drug administered on ischemic stroke patients as it has the ability to break down the clot. However, this drug comes with many limitation. First, the drug has to be administered within 3 hours from the onset of stroke. In addition, tPA can lead to complications for patients with history of bleeding, seizure episodes or high blood pressure. Lastly, there have been reports of death or secondary hemorrhagic stroke as it increases the risk of bleeding.

For hemorrhagic stroke patients, the major part of the damage is contributed by the swelling in the brain. In order to bring down the swelling, they may require a surgery to drain the blood accumulation and to relieve the compression in the brain.

What to expect after a stroke
When a stroke occurs, the blood supply to the area downstream from the lesion is cut off, preventing brain cells in the area from receiving oxygen and nutrients. Brain cells have no backup energy source so within a few minutes of oxygen deprivation, these cells become damaged and results in cell death. Consequently, the body parts controlled by those damaged cells also lose their function. This could range from loss of voice to complete paralysis on one side of the body.

Between the two groups of stroke, prognosis is often worse for hemorrhagic stroke. This is because ruptured blood vessels leads to two major consequences: first the blood leaks into the space surrounding the lesion causing compression and damage to the surrounding cells. In addition, areas of the brain tissue downstream from the lesion is unable to receive blood flow and larger areas of the brain receives damage. If the bleeding is severe, the pressure can cause the brain to shift and be pushed through the skull foramen, resulting in death. The inflammatory reaction to cell death results in continuous swelling of the brain, peaking at Day 4 to 5, so symptoms continue to worsen for a few days before patient shows stabilization.